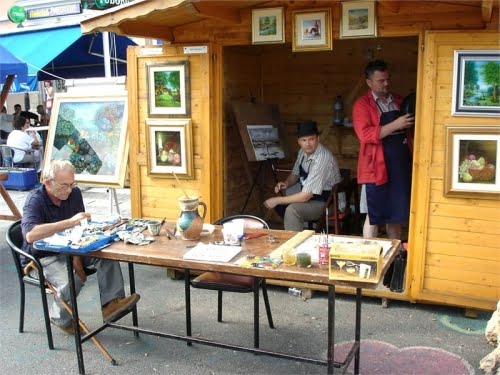 The Motifs of Podravina are one of the biggest cultural events in this part of Europe, which abounds with extremely eye-catching and special features: a naive art fair, an old trade fair, folklore, an antiques fair and a gastronomic offer in Podravina region. In the three days that it lasts, the event is visited by thousands of guests.

Naive art fair – the largest fair of naïve art in the world. In the central town park, there is a large exhibition of naive painting on glass and sculpture in wood which lasts for three days, where the artists demonstrate their skills on the spot.

Old trades – the largest fair of old trades in Europe. The display of old trades, as well as the almost forgotten talents; transform Koprivnica in the days of “Motifs of Podravina” into the unique magic of some immemorial times.

Folklore – folklore groups in their traditional clothing bring us a mix of songs, dances, and customs of Podravina in an interactive way.

Gastronomic offer – Traditional dishes of Podravina are prepared primarily from domestic (organic) food that has been produced as fruit of the hard work of Podravina’s peasants: Prge (cone-shaped cottage cheese, seasoned with red paprika), Čvarci (pork cracklings), krvavice (blood-sausages), kuhani buncek (cooked pig hock), gorički gulaš (stewed vineyard goulash), pečena raca (roast duck) and many others. At the very event, many caterers present their delicacies, and the dishes can also be tasted in the Podravka’s brewery “Kraluš” in the very centre of the city.

Fishermen to their town