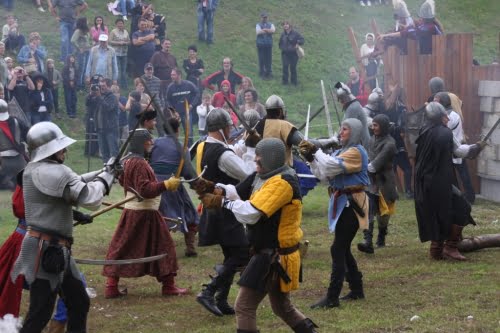 Historical mega spectacle, the Renaissance festival, connects late medieval historical facts and the uniqueness of Koprivnica, Podravina and Croatia with the heritage of the West-European cultural and civilizational sphere (part of which is Croatia), seen at the festival in many knight, crafts and musical groups from around ten European countries. The event is a great example of the development of European identity of the town and the region, and in 2015 and 2016 it was declared TOP event in Croatia in competition with all public events, and was given a Superbrands status in 2016.

The four-day event reconstructs the era when Koprivnica became a Royal Free City (in 1356), and it mostly deals with the period from the end of 15th and 16th century, the period that the Renaissance earth fortifications (where the entire event takes place) originate from. A lot of the content of the four-day event convincingly brings visitors back in those immemorial times, captured by “medieval” craftsmen (it is the biggest medieval trade fair in this part of Europe), merchants, knights, ladies, the king and his court men, waifs, beggars, serfs, alchemists, musicians, entertainers and many others, such as cooks who prepare medieval dishes on site. Only drinks from that era like mead, wine and beer are served, namely from wooden or ceramic cups and bowls. More than one thousand costumed performers coming from Koprivnica, some other part of Croatia or even broader (Slovenia, Italy, Hungary, Czech Republic, Slovakia, France, Germany, Austria, Poland, Bosnia and Herzegovina) leave nobody indifferent, and many visitors can interact and participate in the programme with them. Renaissance festival has been organised since 2006, and it has already become the largest and most complex event of the kind in this part of Europe (according to local and foreign participants, as well as many delighted visitors from the country and abroad.)

Renaissance festival will continue the trend of prohibition of using plastic eating and drinking utensils so the medieval life in the course of the four days that it lasts would be more authentic. This is no easy task because we have to make around ten thousand ceramic beer mugs with the event’s logo, so that each visitor who uses our catering services could get a unique souvenir for a symbolic price. Visitors will be able to keep the beer mug or return it and request refund. We will also form a jury again, and they will walk around presenters and warn them about their shortcomings (adequate luminaires, non-use of plastic bags and plastic eating and drinking utensils, adequate costumes etc.)

Up until our event the oldest part of the town was abandoned and completely neglected (the earth fortifications and the Armoury building.) Other than clearing the greatest part of the wild vegetation and weeds, we have also tidied up the devastated ground floor of the Armoury. To capture the era that we are talking about more convincingly, we have built wooden palisades (fortifications and towers), placed a wooden bridge where it stood in the era, and also set temporary wooden objects for people and animals. We have also staged an attack (diurnal and nocturnal) on the fort which attracts and fascinates a great number of visitors.